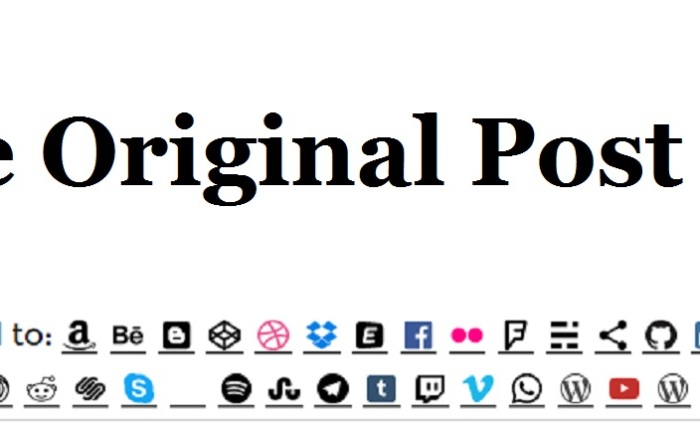 I’d meant to document this back in November when it was discussed at IndieWebCamp Los Angeles, but it was a busy weekend.

In conversation with Tantek Çelik, I asked if a double entendre meaning to POSSE was originally intended when it was coined?

POSSE is an abbreviation for Publish (on your) Own Site, Syndicate Elsewhere (or Everywhere), a content publishing model that starts with posting content on your own domain first, then syndicating out copies to 3rd party services with permashortlinks back to the original on your site.

When I originally heard about POSSE, I considered the original post on my own site as the Sheriff or “leader” and the ensuing syndicated copies as the (literal and figurative) traditional posse which follows along behind it adding ideas, conversation, and help in accomplishing the original post’s mission.

If that second meaning didn’t exist before, it does now…

Went on vacation or fell asleep at the internet wheel this week? Here’s some of the interesting stuff you missed.

Advances in computing power, natural language processing, and digitization of text now make it possible to study our a culture’s evolution through its texts using a “big data” lens. Our ability to communicate relies in part upon a shared emotional experience, with stories often following distinct emotional trajectories, forming patterns that are meaningful to us. Here, by classifying the emotional arcs for a filtered subset of 1,737 stories from Project Gutenberg’s fiction collection, we find a set of six core trajectories which form the building blocks of complex narratives. We strengthen our findings by separately applying optimization, linear decomposition, supervised learning, and unsupervised learning. For each of these six core emotional arcs, we examine the closest characteristic stories in publication today and find that particular emotional arcs enjoy greater success, as measured by downloads.

I was getting concerned that I hadn’t heard back from Sol for a while, particularly after emailing him late last week, and then I ran across this notice through ITSOC & the IEEE:

Shannon Award winner and long-time ITSOC member Solomon W. Golomb passed away on May 1, 2016.
Solomon W. Golomb was the Andrew Viterbi Chair in Electrical Engineering at the University of Southern California (USC) and was at USC since 1963, rising to the rank of University and Distinguished Professor. He was a member of the National Academies of Engineering and Science, and was awarded the National Medal of Science, the Shannon Award, the Hamming Medal, and numerous other accolades. As USC Dean Yiannis C. Yortsos wrote, “With unparalleled scholarly contributions and distinction to the field of engineering and mathematics, Sol’s impact has been extraordinary, transformative and impossible to measure. His academic and scholarly work on the theory of communications built the pillars upon which our modern technological life rests.”

In addition to his many contributions to coding and information theory, Professor Golomb was one of the great innovators in recreational mathematics, contributing many articles to Scientific American and other publications. More recent Information Theory Society members may be most familiar with his mathematics puzzles that appeared in the Society Newsletter, which will publish a full remembrance later.

A quick search a moment later revealed this sad confirmation along with some great photos from an award Sol received just a week ago:

A sad day 4 @USC @USCViterbi @USCMingHsiehEE with the loss of beloved Sol Golomb. Was only last week we celebrated his Franklin medal.

As is common in academia, I’m sure it will take a few days for the news to drip out, but the world has certainly lost one of its greatest thinkers, and many of us have lost a dear friend, colleague, and mentor.

I’ll try touch base with his family and pass along what information sniff I can. I’ll post forthcoming obituaries as I see them, and will surely post some additional thoughts and reminiscences of my own in the coming days.

This series of 12 audio lectures is an excellent little overview of Augustine, his life, times, and philosophy. Most of the series focuses on his writings and philosophy as well as their evolution over time, often with discussion of the historical context in which they were created as well as some useful comparing/contrasting to extant philosophies of the day (and particularly Platonism.)

Early in the series there were some interesting and important re-definitions of some contemporary words. Cary pushes them back to an earlier time with slightly different meanings compared to their modern ones which certainly helps to frame the overarching philosophy presented. Without a close study of this vocabulary, many modern readers will become lost or certainly misdirected when reading modern translations. As examples, words like perverse, righteousness, and justice (or more specifically their Latin counterparts) have subtly different meanings in the late Roman empire than they do today, even in modern day religious settings.

My favorite part, however, has to have been the examples discussing mathematics as an extended metaphor for God and divinity to help to clarify some of Augustine’s thought. These were not only very useful, but very entertaining to me.

As an aside for those interested in mnemotechnic tradition, I’ll also mention that I’ve (re)discovered (see the reference to the Tell paper below) an excellent reference to the modern day “memory palace” (referenced most recently in the book Moonwalking with Einstein: The Art and Science of Remembering Everything) squirreled away in Book X of Confessions where Augustine discusses memory as:

“fields and spacious palaces” “…where are the treasures of innumerable images, brought into it from things of all sorts perceived by the senses. There is stored up, whatsoever besides we think, either by enlarging or diminishing, or any other way varying those things which the sense hath come to; and whatever else hath been committed and laid up, which forgetfulness hath not yet swallowed up and buried.”

Those interested in memes and the history of “memoria ex locis” (of which I don’t even find a reference explicitly written in the original Rhetorica ad Herrenium) would appreciate an additional reference I subsequently found in the opening (and somewhat poetic) paragraph of a paper written by David Tell on JSTOR. The earliest specific reference to a “memory palace” I’m aware of is Matteo Ricci’s in the 16th century, but certainly other references to the construct may have come earlier. Given that Ricci was a Jesuit priest, it’s nearly certain that he would have been familiar with Augustine’s writings at the time, and it’s possible that his modification of Augustine’s mention brought the concept into its current use. Many will know memory as one of the major underpinnings of rhetoric (of which Augustine was a diligent student) as part of the original trivium.

Some may shy away from Augustine because of the religious overtones which go along with his work, but though there were occasional “preachy sounding” sections in the material, they were present only to clarify the philosophy.

I’d certainly recommend this series of lectures to anyone not closely familiar with Augustine’s work as it has had a profound and continuing affect on Western philosophy, thought, and politics.

View all my reviews