Below is my response to Adeline Koh‘s article “Path: A Twenty-First Century Geotagging Journal” which appeared in the Chronicle of Higher Education’s Prof Hacker Blog on August 29, 2012. 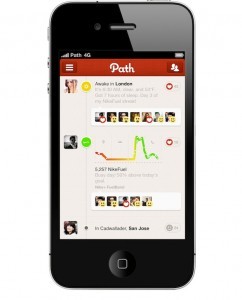 Adeline, Path might be a reasonable tool for accomplishing what you’d like, but it’s original design is as a very small and incredibly personal social networking tool and therefore not the best thing for your particular use case here. Toward that end, it’s personalization ability to limit who sees what is highly unlikely to change as they limit your “friends” to less than your Dunbar number in the first place. Their presupposition is that you’re only sharing things with your VERY closest friends.

For more functionality in the vein you’re looking at, you might consider some of the Google tools which will allow you much more granularity in terms of sharing, tracking, and geotagging. First I’d recommend using Google Latitude which will use your cell phone GPS to constantly track your location at all times if you wish of the ability to turn it on and off at will. This will allow you to go back and see exactly where you were on any given day you were sending them data. (It’s also been useful a few times when I’ve lost/left my phone while out of the house or in others’ cars and I can log in online to see exactly where my phone is right now.) Latitude will also allow you to share your physical location with others you designate as well as to export portions of data sets for later use/sharing.)

Unbeknownst to many, most cell phones and increasingly many cameras will utilize GPS chips or wifi to geolocate your photo and include it in the EXIF data imbedded into the “digital fingerprint” of your photo (along with the resolution, date, time, what type of camera took the photo, etc.) For this reason, many privacy experts suggest you remove/edit your exif data prior to posting your photos to public facing social media sites as it can reveal the location of your personal home, office, etc which you may not mean to share with the world.) There are a number of tools you can find online for viewing or editing your exif data.

You can then upload those photos to Google Plus which will allow you to limit your sharing of posts to whichever groups of people you’d prefer with a high degree of granularity, including using email addresses for people who aren’t already on the service. (They actually have a clever back up option that, if selected, will allow your phone to automatically upload all your photos to G+ in the background and making them private to you only for sharing at a later date if you choose.) I’m sure that with very little work, you can find some online tools (including even Google Maps perhaps) that will allow you to upload photos and have them appear on mapping software. (Think about the recent upgrade in Craigslist that takes posting data and maps it out onto the Openstreetmap.org platform).

Finally, as part of Google’s Data Liberation initiative you can go in and export all of your data for nearly all of their services including Latitude and from Picasa for photos.I think that playing around with these interlocking Google tools will give you exactly the type of functionality (and perhaps a little more than) you’re looking for.

Their user interface may not be quite as beautiful and slick as Path and may take half an hour of playing with to explore and configure your workflow exactly the way you want to use it, but I think it will give you a better data set with a higher degree of sharing granularity. (Alternately, you could always develop your own “app” for doing this as there are enough open API’s for many of these functions from a variety of service providers, but that’s another story for another time.)