David Christian, a trained historian, is one of the leading proponents of the relatively new concept of Big History, which I view as a sea-change in the way humans will begin to view not only the world but our place in it and what we might expect to come in the future.  His work presents a truly monumental and profound thesis and a drastically new framework for where humankind fits into the universe. Of the broad variety of works I’ve read in the past several decades, it is simply one of the most interesting and cohesive theses I’ve come across, and I highly and unreservedly recommend it to everyone I know.  I’d put it on par or above works like Jared Diamond’s Guns, Germs, and Steel and Matt Ridley’s The Rational Optimist among others for its broad impact on how I now view the world. For scientists and researchers it has the potential to be the philosophical equivalent of The Bible and in fact, like many religious texts, it is in effect a modern day “creation myth,” albeit one with a scientific underpinning.

Christian’s work was initially brought to my attention by an article in the Chronicle of Higher Education by Jeffrey R. Young in which he mentioned that Bill Gates was a big fan of Christian’s work and had recommended it himself at a TED conference. (Gates is now also a financial supporter of Christian’s Big History Project.) I myself was aware of the Learning Company’s generally excellent coursework offerings and within a few weeks got an audio copy of the course of forty-eight lectures to listen to on my daily commute. 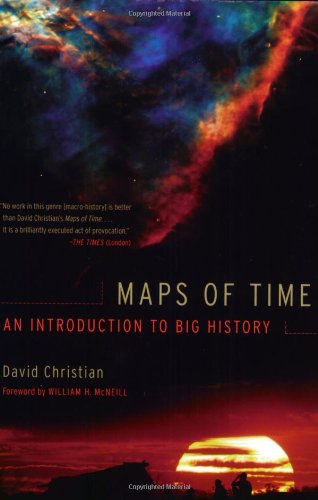 I’ve now devoured both his rather large text on the subject as well as a lecture series he created for a course on the subject. Below are brief reviews of the two works.The magnum written opus Maps of Time: An Introduction to Big History is an interesting change of reference from a historical perspective combining the disciplines of physics, cosmology, astronomy, geology, chemistry, microbiology, evolutionary theory, archaeology, politics, religion, economics, sociology, and history into one big area of contiguous study based upon much larger timescales than those traditionally taken in the study of historical time periods. Though it takes pieces from many disciplines, it provides for an interesting, fresh, and much needed perspective on who humans are and their place in not only the world, but the entire universe.
By looking at history from a much broader viewpoint (billions of years versus the more common decades or even just a few centuries) one comes away with a drastically different perspective on the universe and life.

I’d highly recommend this to any general reader as early as they can find time to read through it, particularly because it provides such an excellent base for a variety of disciplines thereby better framing their future studies. I wish I had been able to read this book in the ninth or tenth grade or certainly at the latest by my freshman year in college – alas the general conception of the topic itself didn’t exist until after I had graduated from university.

Although I have significant backgrounds in most, if not all, of the disciplines which comprise the tapestry of big history, the background included in the book is more than adequate to give the general reader the requisite introductions to these subjects to make big history a coherent subject on its own.

This could be an extremely fundamental and life-changing book for common summer reading programs of incoming college freshman. If I could, I would make it required reading for all students at the high school level. Fortunately Bill Gates and others are helping to fund David Christian’s work to help introduce it more broadly at the high school and other educational levels.

Within David Christian’s opus, there is also a collection of audio lectures produced by The Learning Company as part of their Great Courses series which I listened to as well. The collection of forty-eight lectures is entitled Big History: The Big Bang, Life on Earth, and the Rise of Humanity (Great Courses, Course No. 8050). It provides a much quicker philosophical overview of the subject and doesn’t delve as deeply into the individual disciplines as the text does, but still provides a very cohesive presentation of the overall thesis.  In fact, for me, the introduction to the topic was much better in these audio lectures than it was in the written book. Christian’s lecture style is very lovely and even better than his already excellent writing style.

“Because of the scale on which we look at the past, you should not expect to find in it many of the familiar details, names, and personalities that you’ll find in other types of historical teaching and writing. For example, the French Revolution and the Renaissance will barely get a mention. They’ll zoom past in a blur. You’ll barely see them. Instead, what we’re going to see are some less familiar aspects of the past. … We’ll be looking, above all, for the very large patterns, the shape of the past.”   -David Christian

In the audio lectures Christian highlights eight major thresholds which he uses as a framework by which to view the 13.4 billion years of history which the Universe has presently traversed.  Then within those he uses the conceptualization of disparities in power/energy as the major driving forces/factors in history in a unique and enlightening way which provides a wealth of perspective on almost every topic (scientific or historical) one can consider. This allows one to see parallels and connections between seemingly disparate topics like the creations of stars and the first building of cities or how the big bang is similar to the invention of agriculture.

I can easily say that David Christian’s works on big history are some of the most influential works I’ve ever come across – and having experienced them, I can never see our universe in the same naive way again.

For those interested in taking a short and immediate look at Christian’s work, I can recommend his Ted Talk “The History of Our World in 18 Minutes” which only begins to scratch the surface of his much deeper and profound thesis:

Given how profound the topic of big history is, I’m sure I’ll be writing about and referring to it often. Posts in relation to it can be found here with the tag: “big history“.